The end of formats, the return of fun...

Slightly Magic Day is a mere 11 days away, and counting down according to the official website, so here's an update on its progress. After a slight hiccup with the Linux version, I can now report that all the desktop versions are fully complete, uploaded and waiting for release on the appointed day - 7.7.14. That's PC, Mac and Linux, in case you were wondering, and quite a relief for me.

Actually, better than that - they're available for pre-order right now, so feel free to scamper along to slightlymagic.uk to find out more. By some technological wizardry, anyone who pre-orders will be able to download the game as soon as it's released. Plus there's a Physical Fun Bundle option too, which must at least be worth a snigger.

Ah, but what about the mobile versions, I hear you ask? Has the authentic 8bit graphics and original screen ratio fallen foul of the appstore guardians? Erm, well no. Both Slightly Magic and Slightly Magic Lite passed all tests with flying colours. Happy days. Just the OUYA version to go now, unless I sneak another platform past the guards.

Desktop versions have a few nice extras, including the ability to listen to all of Allister's in-game music from a single screen. And the free 'Lite' version (which contains the entire first level) should be available on all formats on 7.7.14 too.

Now I just have to order the postcards, posters and badges for the Fun-Bundle options, and one of those exhibition banner stands for the Wales Games Development Show, which I'll be appearing at on 11th July, if you happen to be around.

Counting down to happiness... 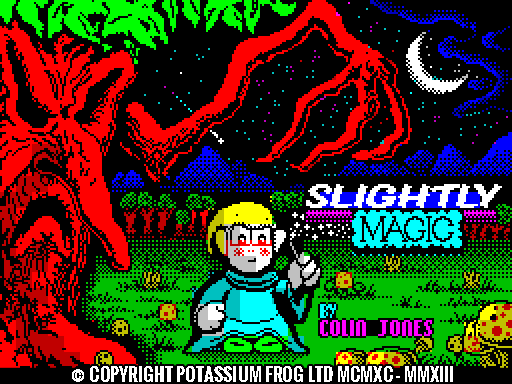 Only now can it be told, Slightly Magic is returning on 7.7.14 on a number of formats. How many formats exactly, you may ask. At which point I mumble 'loads' and point at an imaginary distraction just over your left shoulder.

But what the heck. You've taken the trouble to come to this blog post, and it might be a little interesting, so here's where Slightly Magic really is today, and how I dare come to challenge the Fates and predict an exact launch date - that always used to be for publishers to worry about, after all.

It's just over a month to release date, and I've personally played Slightly on PC, Mac, iOS, Android and OUYA. I have complete confidence that the game runs fabulously on Linux too - I'm just not too sure exactly what that is. Hey, what is that over your shoulder, anyway?

All this, of course, doesn't guarantee that my magical friend can jump through all the hoops and dance routines necessary for successful app store releases. Matter-of-fact I wouldn't be surprised if sticking to the original screen ratios (of which there were 2) might cause some problems on certain formats. Time will tell.

But today, as we speak, even now, at this moment in time, there is at least one format ready and waiting for a final press of an on-screen 'release now' button. Other submissions will be attempted this week, but the majestic freedom and speed of the Google Play store submission process means that at least the Android version is sure to be out on 7.7.14. Unless I sleep late, of course.

And I figure that a month should be enough to get a respectable number, judged as a mean sample of all available format ratios, of versions out for Slightly Magic Day. Also, I'm itching to start work on the sequel, Slightly Spooky, and I've finally found that tin of magic beans that's been hiding in the back of my cupboard for the past 20 years. More news here soon, but I should seriously take a look over your shoulder. That just looks weird.

www.slightlymagic.co.uk
Posted by Unknown at 08:53 No comments: